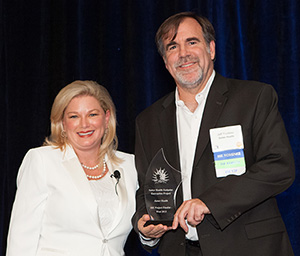 After a few years of participating at T.E.N. and ISE® Programs, I decided to submit a nomination for myself, as well as my team. My team had been working on a project that I thought deserved recognition and I wanted to do something to show them how much they were appreciated.

I was honored to be selected as an executive finalist for the ISE® West Awards in 2013 and winning later that year at ISE® North America in the Health Care Category was an even bigger honor. There are a lot of bright people doing what we do and I respect them. To be selected as a member of this group is a true privilege. With that said, the team award was really the more important award. In security, when you do your job well – nothing happens. The recognition piece is something that was missing until the ISE® Awards were able to fill that void.

Trying to keep your team motivated is a constant challenge. Being able to celebrate our team with an award from some of the industry’s most respected names was very motivating. When we returned back to work, I wanted to keep the momentum going from our team win at the ISE® Awards so I planned a luncheon to present the awards to the team members and give individual recognition to each one. I was really proud to be able to celebrate my team.

The ISE® West Executive Forum and Awards was a really well-rounded experience. The ISE® Awards bring together the CISOs that I want to bounce my ideas off of and build relationships with. Having that network of people available is a huge value. No one can know everything, so having the ability to call on this group when you need a favor or have a question is amazing. I was able to build such a great network and gain some amazing friendships from attending the ISE® Awards.

I highly recommend submitting a nomination for your team or yourself, but especially if you feel strongly about the accomplishments of your team. The motivation and benefits you will receive as a result highly outweigh the effort of the nomination. T.E.N. and the ISE® Award Program have enabled me to build a strong peer network, which has strengthened my business network and allowed me to make lifelong friendships with people in the security industry. Who wouldn’t want that?