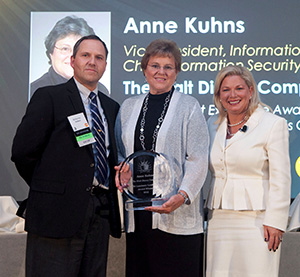 I learned about the ISE® Award while attending the CSI National Conference. I was on the CSI Advisory Council and the director of the Computer Security Institute had introduced me to Marci McCarthy. I joined her for lunch and, after learning about our security initiatives, she posed a question that changed my life: “Why don’t you nominate yourself for the ISE Southeast Award?” At the urging of those around the table, I did.

I was completely stunned and humbled to hear my named called as the winner of the 2007 ISE® Southeast Information Security Executive of the Year Award. I was in good company with the other nominees and had felt like I was simply doing my job. To receive an award for doing something special was a foreign concept. In 2009, I was chosen by my peers to receive the ISE® North America Peoples’ Choice award. In 2012 I was very surprised, proud and humbled to be honored with the ISE® Luminary Leadership Award. Knowing the luminaries who previously received the award, I felt like I was standing on the shoulders of giants.

One of the greatest benefit to receiving the ISE® Award is the visibility into what other organizations are doing and the ability to benchmark your security program. I felt that we were implementing the right types of programs, but had nothing to base it on, nothing to compare my programs to. Winning the award added a layer of credibility to what I was promoting within the organization and validated that we were rolling out solid security programs. It confirmed for me and senior management that we were on the right track, and in some cases, ahead of the curve.

Participating in the ISE® programs helped me to expand my personal network. In 2007, Orlando wasn’t exactly a center for information security. The ISE® events opened a door for me to meet and build relationships with other information security executives. When you need to bounce ideas off of someone or need help answering questions, having those contacts is invaluable. It wasn’t uncommon for me to shoot an email to a bunch of people asking for help or pick up the phone and talk about any topic off the record.

It’s this Community that I value most about T.E.N. and the ISE® programs. Sharing best practices amongst ourselves is critical because we don’t have the time, money, and resources to solve all the security problems independently. The T.E.N. ISE® Award programs and other networking functions provide a forum and venue where security and IT leaders can get together and talk about hot topics and best practices. To be recognized with an ISE® Award is encouraging, reassuring, and very complimentary. But the ISE® programs are more than recognition. The ISE® programs provide Community and an opportunity to gain visibility, build your network, and connect and collaborate with peers. They are a place to get ideas and share best practices. When you’re not sure you’re headed in the right direction, they provide resources for validation and benchmarking your programs. I was never one for being a self-promoter. Looking back at all the people I’ve met and benefits I’ve gained, I’m glad I rose to the occasion. Now, I ask you: “Why don’t you nominate yourself for the ISE® Information Security Executive of the Year Award?”