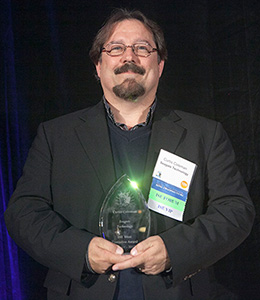 I learned about the ISE® Awards by chance in 2005 when I saw an announcement that they were being held for the first time on the West Coast. I was immediately interested and submitted a nomination. While I didn’t place, I was impressed with how the program was conducted, especially the peer-review judging process. Oftentimes award programs fall prey to vendor influence or you don’t know who is doing the judging. The impartial judging and peer recognition gave the award program a lot of credibility. I knew that I wanted to stay involved.

Opportunity knocked again in 2012, when one of my vendors suggested nominating us for the project and executive awards. We had had a successful year with our security initiatives and I was excited at the thought of competing again. I particularly wanted my security manager to have the chance to be recognized by his peers for the success he achieved on a special project. During the award ceremony, I thought how wonderful it was just to be a finalist. And then I found out that I was the winner. I had a moment of doubt. Did I hear that right? As I walked to the stage, I had an overwhelming feeling of humbleness because I knew that these were my peers and they had judged me as doing the right things – and doing them well.

Winning the ISE® Award increased by professional credibility, brought new credibility to the security program, and increased our visibility within the company, especially with the CEO and the Board. We were able to improve our security posture because engineers, who in the past would have avoided us, sought our help to solve new security problems. Being recognized for our security program also gave the company a competitive advantage and helped to improve our relationships with our supply chain and business partners.

The best part about the T.E.N. ISE® experience is the bonding and the friendships I have formed with people who I would never have had the chance to meet otherwise. When you experience something together, it creates a deeper friendship, a bond that can't be gained by just meeting each other at a conference. It’s not the kind of thing that you can measure, except that I know that if I need help, all I need to do is call.

One aspect of the ISE® Award program that I especially appreciate is the quality of the sponsor community. Having the ability to meet face-to-face and ask in-depth questions of the actual founder of the company or the CEO, or a senior executive who understands my business and security needs, is invaluable.

Have you thought about what your company would do if you or your project received an award? Do you have a team that deserves recognition? Are there security leaders who you’ve read about that you would like to meet? Do you want to share your successes and collaborate with your peers? The ISE® Award program is a great venue for doing all of that. What are you waiting for? Submit a nomination today. The possibilities are endless.